*Suggestions for accommodations and evening events will be sent out prior to the tournament!

We are excited to announce the 7th Annual Emergency Services Charity Hockey Tournament will be held in Niagara Falls on March 25th & 26th, 2020. This emergency service hockey tournament has proven to be a growing success and this year’s event has already proven to continue that trend. We are thrilled to announce that the Shoot for a Cure Campaign has joined forces with the Niagara Paramedic Association for the 7th Annual NPA Charity Hockey Tournament.

We will again host multiple divisions of competition at the Gale Centre in Niagara Falls. All skill levels are welcome to come and participate. We will also be hosting our raffle again and we have some excellent prizes lined up this year!

DEADLINE TO REGISTER YOUR TEAM IS FEBRUARY 25TH, 2020!…Space is limited!

Create your own Fundraising page below and start pledging for Shoot for a Cure Campaign.

Don’t forget to check out the awesome pledging incentives!

ALL PLAYERS must sign off on the electronic waiver prior to the tournament. You can access it here!

Instructions How to Create a Fundraising Profile

Holiday Inn by the Falls

In January of 2014, four members of the Niagara Paramedic Association (NPA) were driving back to Niagara after just finishing playing in an out-of-town emergency service hockey tournament. This was the last of several out-of-town tournaments the NPA hockey team had played in over the season. During the long trek home, the four young paramedics started to wonder why nobody had started an emergency service hockey tournament in Niagara, at that point the seed was planted.

With no experience in organizing a hockey tournament the paramedics began brainstorming and by the time they had arrived home they had booked ice time, contacted multiple teams, called hotels for accommodations and started organizing a raffle. This car ride would prove to be the first official meeting that would lead to the inaugural Niagara Paramedic Association Charity Hockey Tournament just two months later in March 2014. Now that there was a charity hockey tournament in place, the tournament organizers, of course, had to find a charity to support, and as fate would have it one fell into their laps.

One of the Niagara paramedics put forward his brother’s charity called “Troy’s Run”, they’re all about awareness and prevention for traumatic brain injuries. They have some great initiatives like giving hockey and bike helmets to kids and running baseline concussion testing for teams. The NPA tournament organizer decided this would be a great charity to get behind and the motivation for the tournament had gained momentum.

The first tournament in March of 2014 saw the NPA host 8 teams in a single division in Niagara Falls. The next year still not knowing quite what to expect, the tournament doubled in size to 16 teams and has continued to grow each year.

Last year’s annual tournament was held in March 2019 and saw 29 emergency service teams throughout three divisions helping us raise $21,000 for our cause. This event has seen great success since its inauguration with a tremendous amount of support from the community, the volunteers and the tournament participants. This year’s tournament will again be benefiting the Shoot for a Cure campaign, along with developing our new CONNECTED platform for Mental Health.­­

Shoot for a Cure is a fundraising campaign of the Canadian Spinal Research Organization and StopConcussions Foundation. Funds raised by the campaign go towards the treatment, prevention and research of neurotrauma injuries and mental health initiatives.

Shoot for a Cure 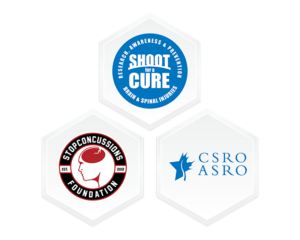 Shoot for a Cure is a fundraising campaign of the Canadian Spinal Research Organization (CSRO), the American Spinal Research Organization (ASRO) and the StopConcussions Foundation, integrating professional and amateur sports/sporting events, corporate sponsorship and community partnerships, which includes other non-profits and non-governmental organizations. Our goal is to raise funds, increase awareness and assist in prevention and cure of neurotrauma injuries. Shoot for a Cure is an international campaign uniting neurotrauma communities around a common cause. In 2015, the Shoot for a Cure Campaign was re-launched with new founding partners; the Canadian / American Spinal Research Organization (CSRO/ASRO) and the StopConcussions Foundation.

StopConcussions is a not for profit organization who specializes in the area of prevention of acquired brain injuries such as head trauma and concussions. StopConcussions educates players, administrators physicians, coaches and officials on the causes, effects, and consequences of concussions and neurotrauma injuries in all sports. StopConcussions provides the educational material that players, parents, coaches, and officials need to know about concussions and how to become aware of the injuries and how to make sports safe for the players. The goal is to have prevention manuals for all sports and to hold clinics both in sport and in the classroom for all parties involved to educate them on the severity and best practices to prevent concussions in their respective sports.

For more information or questions about the event, please contact: